We currently have three studio spaces that are coming available at the end of February. For more info check out the Studios page. 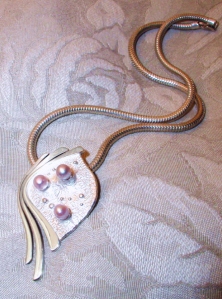 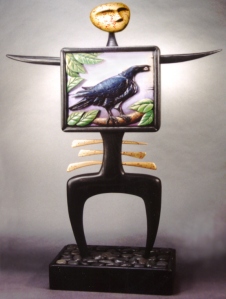 If you have to pick only one First Friday at Chroma Studios Gallery to attend this year (besides my show in April, of course!), this is the one you should make an effort to see! David Lloyd Stewart is not only an amazing artist, he is an amazing person. Down to earth and talented with a great sense of humor!

Other new artists; Cindi Gaudette, Suzanne Baca, and Justin Simenson have recently signed on for representation. In addition to our regular Chroma artists, Caroline C Blaker,Diane Walton Reitz, Jacqui Lewnes, Susan See, Paula Snyder, Cari Pier, Jean O’Neill, Dayna Griego, Nick Harmon and Kerri Green. Last but not least, I will have a few pieces hanging, including my newest large canvas that I have decided to name “Awakening”.

David Lloyd Stewart received his formal training as a part of his major
in art at the University of New Mexico beginning in 1968, but many of his innovative
techniques are self-taught.  His variety of style is a distillation of those cultures
he observed in world travel as a boy, having lived and studied in Japan, Norway,
England and on both coasts of the United States.  A full-time professional artist
for over thirty years now, he draws from prior experience as a commercial artist,
industrial designer and illustrator .
During the past thirty years of showing his work at major art
festivals from coast to coast, David has earned more than forty awards for
excellence of craftsmanship and creativity of design, ranging from “best of
category” to “best of show”.  He has participated in some of the most prestigious
shows in the country, including group and one-man shows, and served as a juror
for the New Mexico Arts & Crafts Fair in 1996.  He has lectured to professional
associations, was featured on a PBS “Colores” segment, and was voted “Master
Craftsman” status by the Albuquerque Designer-Craftsmen even at the
beginning of his career in 1976.  In January of 1999, he was invited to become a
member of the Board of Directors for Weems Artfest, where he currently serves
as a juror.  His present gallery affiliations include the Weems Gallery, Just
Imagine Gallery, and Chroma Gallery, all in New Mexico, Halcyon at Nye Beach
Gallery in Oregon, Gilliams Center for Creative Design in Scottsdale, Arizona, and
Woman on the Edge Gallery in San Antonio, Texas.  Preferring to maintain a solid
communication line with his local customers, he shows on a regular basis at the
Tijeras Open-Air Art Market, as well as once a year at the Weems Artfest, the New
Mexico Arts & Crafts Fair,and various other local art fairs.
David’s devotion to mixed-media sculpture and handmade art-jewelry as
forms of personal expression has been shared over the years with a love of
painting in acrylic, oils and watercolor, as well as various forms of graphic arts.
These diverse disciplines have allowed expressions and growth impossible in the
confines of a single medium, as the artist finds that each medium continually
breathes new life into the next.  His application of these skills culminate in
unique works of art that draw on his inspiration by primitive images with a
whimsical, contemporary flair.
His work may be found on the Web at StewartArt.com, and he maintains
a web-log (blog) at StewartArt.blogspot.com.  His studio is located at 110-C  Altez, SE,
Albuquerque, NM 87123, where the phone number is (505) 296-1400.
His Email address is David@StewartArt.com.

This article/blog post was written by one of our Chroma Studio writers, Jennifer Ruden. I am reposting it here with Jennifer’s permission.

We met for the first time nearly a decade ago. You were meant to be a rest spot, a mere pause in my vector aimed somewhere else.

I had never even heard of Albuquerque—your name like a rock in my mouth, damn near impossible to spell. I had pictured desert palms sweeping upwards majestically, a globular sun bright as egg yolks. I imagined sand, coyotes, and glittery sombreros. I packed only shorts and t-shirts.

The giant Goodwill on Juan Tabo (which I then pronounced WAN TABOO) was a beacon broadcast that gray December evening. I scooped up sweatpants for $1.50, a fleece-lined coat for $3.00, and mittens for .50. Afterwards I had my way with a Denver omelet in the Village Inn, slurped velvety coffee (free refills) with abandon, and smoked cheap cigarettes purchased off the res. Outside, beyond the abandoned Burger Kings and tattered Discount Tires shops, past the panhandlers straddling the interstate ramps, the Sandias yawned exquisitely. What a strange combination you were then– all loveliness and corruption, decadence and deficiency. I had about $200 in my pocket. Why with money like that in a place like this I could live like a queen. So I stayed.

Years later, in the midst of marriage, family, careers, and age I’ve nearly forgotten how to be poor. I think you have too. It’s true, Albuquerque. Not too long ago someone plinked coins in your pockets, swept out your corners and dropped condominiums on your once pocked streets. In the midst of gentrifications, planned communities, commuter trains, landscaped highways, and tenuous bubbles, I hardly recognize you.

One night, while ensconced in a swanky new downtown restaurant, we raised our champagne flutes and toasted you, dear city. We tipped our glasses back, patted our full bellies, disbelieving that times are hard. The restaurant teemed with people who were sated, rich, and warm. How different a view than the one afforded to me in the Village Inn those years ago. Your edges are softer now, blurred in green light. You smell of a fish that doesn’t even swim here.

And just when you were finally getting used to your new look. . . This. For starters, your Governor is leaving. Bill– who stood you in front of a mirror, pinched your cheeks and said, This is a face worthy of Hollywood. What’s in store, you wonder. Who will love me now, you ask. Who will polish my silver lining–pick up the pieces now that the diaphanous bubble has inevitably burst?

I’m here to say, No te preocupadas, Albuquerque. You’ll be fine. This “recession” is just a dip in your otherwise robust EKG. Remember: no one wears distress like you do. Think of it as an evening gown, red and low cut. Who needs milk and honey when there’s more than enough Enfamil and Splenda to go around.

Besides, those other cities have nothing on you with their high class hovels and self-conscious vacancy signs. Those cities are positively shaking in their Prada boots. Not you. Not us. We’ve been here before. This we can do. If being broke were a sport, Albuquerque, we’d take the gold every time. Indeed economic adversity is difficult, but we make it look easy.

It’s just a matter of waiting it out. We know that soon enough winter will yield and the earth will thaw. Granted, we might be the last to hear the ice crackle, creak and shift, but we’re the first to claw our desperate way out. Just look at us—living proof that treasures are often buried in the most dire and unlikely of places.

Keep your chin up.

Even though she is a Jew and not often prone to sentimentality, Jennifer Ruden thinks there is no spot more beautiful at Christmastime than Albuquerque. She is riding out recession in a Westside home that lost most of its value shortly after it was purchased. She recently filled the spare room with another kid. You can reach her at abqwriter@yahoo.com

If you’ve been here before, you will notice that things are looking a little different. I’ve spent the last couple of days updating and adding pages, links, etc. to the Chroma blog/website. You can now find out more about happenings here at Chroma. There will be more updates and news posted in the next week or so. You can see the list of studio and gallery artists represented by Chroma on the right hand sidebar. Most are linked to the artist’s web page or blog so you can find out more about each artist. In the future we will also have videos from openings, interviews with the artists and more class listings, show listings, etc.

Last night’s First Friday show was a smashing, fhabulous success! Nick Harmon is an amazing artist, as well as a very cool dude. We were extremely pleased with the turnout for the opening and thrilled to be the first to show Nick’s lighted piece “Resistance To What Is”. It was entertaining to see people’s reaction to the floor as they walked in the door. If you get out to see any shows this year, this one should be at the top of the list!
Thanks to Nick for the amazing work, and thanks to everyone who came out to see it last night. The show will be up until the 31st of January. We are open Thursday-Saturday 12-6 pm. You can see more of what Nick does on his website, Frescoharmony. Also, see the cool demo video below!

Some reactions to "Resistance To What Is" 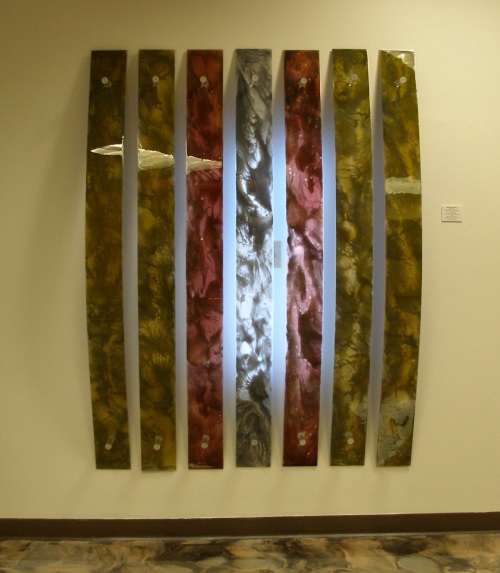 Resistance To What Is

In the gallery/studio today, yes, on a holiday, to get the January show up and the gallery ready for tomorrow’s opening reception. The First Friday reception will be open from 5:30 to 8:30 pm. The show will be up for the entire month of January.

Our January featured artist, Nick Harmon, is showcasing 8 new pieces including the entry way floor, and an amazing 7 piece backlit acrylic series that’s sure to please.

Nick Harmon is owner of FHAB Concepts, and developer of Fresco Harmony, recently he decided to take a tour of newer galleries affiliated with the AABA (Albuquerque Arts Business Association) to show art and pollinate networks. Not only does he create, original media fine art, he also creates innovative patented wall and floor surface applications.

In conjunction with the opening at Chroma Gallery, we were privileged to be able to finish a section of floor in the gallery in his patented technique. This floor system is not a stain, it’s a coating, and it’s 100% original, and green. Both the wall and floor concepts were accepted into the International Green Ideas Show in Oct where they were a hit. The artwork is where Nick researches new ideas for other, more practical, applications, ie, counter tops, tiles made from moisture resistant hardy backer, transparent window coverings, glass block and more.

My contribution, the drawing of the spiral

The finished spiral, come on down to see the whole floor!